Every bill and resolution begins its journey to enactment on the floors of the Senate or House chamber during session. 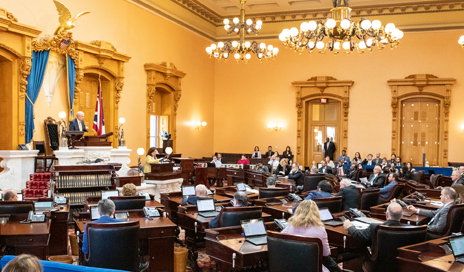 A quorum of senators must be present in order to conduct business. For the Ohio Senate, a quorum is a simple majority, or seventeen, of the 33 members.

Pete Fact : The Ohio flag is hoisted above the Senate (or North) side of the Statehouse on days of Senate session. On days the House of Representatives meets for session, the Ohio flag is displayed on the House (or South) side of the Statehouse. The picture above was taken on a day of Senate session. Session is the meeting where all senators assemble to cast votes on bills, resolutions, and executive appointments.

Pete Fact : At the end of each two year session of the General Assembly, the Senate adjourns sine die. Sine die is Latin for "without day"; that is, without a future meeting date. The Senate President is given the authority to set session days and times. Dates for session are established every six months and the Senate typically meets three days a week: Tuesdays at 1:30 p.m., Wednesdays at 1:30 p.m., and Thursdays at 11:00 a.m.

Four cameras are stationed around the Chamber to record Senate session

Pete Fact : Ohio House and Senate sessions were televised for the first time in 1960. Live web streaming began in 1998. Although the House and Senate chambers were equipped with electronic voting devices in 1992, members of the Ohio Senate still conduct roll call votes by voice. By contrast, the 99 members of the House of Representatives use desktop buttons to vote on a bill and the electronic votes are displayed on two large screens on the walls of the House Chamber.

The buttons on the Senate members' desks do serve a purpose. After each senator has cast his or her vote, it is recorded by the Senate Clerk and one of two lights indicates whether each senator voted in favor or against the proposed legislation. These button lights allow each member to ensure that his or her vote was recorded accurately. Senators also use the buttons on their desks to indicate to the Senate President when he or she would like to be recognized to speak. The names of the members who wish to address the body are displayed on a computer on the Senate President's podium. The President uses the list to manage the order of floor debates.

Pete Fact : The Senate is directed by law to keep a journal of its proceedings. When necessary, the members’ yeas and nays are taken by a roll call vote and entered in the journal. The Senate Chamber is also equipped with television cameras which record each session for broadcast on local public television stations and for live web streaming through The Ohio Channel.

A rail separates the Senate floor from the visitors' gallery.

Pete Fact : The Senate adopts its own rules each legislative session to prescribe the body’s procedures and organization. The Senate also, in conjunction with the House of Representatives, adopts joint rules to govern the legislative conduct between the two houses. Parliamentary actions not specifically addressed in the Senate rules or the joint rules may be found in Mason’s Manual of Legislative Procedure During session, only senators, staff and press members are permitted to be on the floor. An ornate white railing encloses the Senate floor and the members' desks. Visitors are encouraged to watch their government in action and are welcome to sit in the visitors' gallery outside the railing.

A senator must be inside the railing of the Senate floor in order for his or her vote to be counted. Members may not speak until officially recognized by the Senate President.